FE Hotels has opened two new Adina Apartment Hotels in Germany as part of its expansion plans in Europe – one in the charming medieval city of Nuremberg and one in the major financial hub of Frankfurt, home to the European Bank. The new hotels add to TFE Hotels’ portfolio of five hotels in Berlin, Hamburg and Frankfurt and will be joined in 2017 by new hotels in Leipzig and a second in Hamburg.

“The opening is part of our exciting expansion plans in Germany, where we continue to go from strength to strength as a premium provider in the growing apartment hotels segment and the only Australian group to operate hotels in Germany,” she said. “The Frankfurt and Nuremberg hotels signal the beginning of another growth phase to what was a portfolio of seven and is now nine European hotels.”

The new Frankfurt hotel is the second Adina Apartment Hotel in the city. It is close to the fairground area and new Skyline Plaza shopping mall in the famous Europe district (Europaviertel) as well as Frankfurt’s Main Station and the city’s first Adina Apartment Hotel, the Neue Oper. It caters to corporate and holiday markets with 181 studios and apartments spanning 11 storeys, some with spectacular views across the glittering lights of Frankfurt’s high rise bank towers. There is a bar, restaurant and a fitness area on the 10th floor. The property is next to the newly opened Kap-Europa conference centre and will have two conference rooms for small meetings on the ground floor.

The new Nuremberg hotel is located in one of Europe’s most charming medieval cities, famous for its spectacular Christmas markets, the Christkindlesmarkt, Nuremberg. It is in a redeveloped building and comprises 138 apartments in the old town, only 750 metres from the main market square and next to the German National Museum. It features three stunning conference rooms spanning 200 square metres and an outdoor terrace with spectacular views over the city. It is in particular designed to support the city’s thriving business centre and is perfectly located for tourists visiting Germany’s most famous Christmas market.

Typical to all Adina Apartment Hotels, the new properties combine contemporary design with a home-style atmosphere, generous spaces and hotel services such as room service, fitness centre, pool, spa and dining areas. There is a selection studios of 30 sqm to two-bedroom and three-bedroom apartments with separate living areas, fully-equipped kitchens and its own washer and dryer. Hanover to get a second IntercityHotel 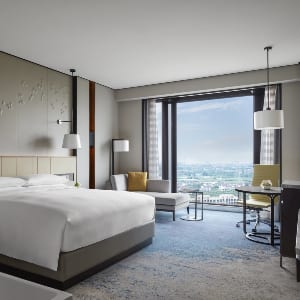