InterContinental Hotels Group (IHG) has announced the opening of Holiday Inn Osaka Namba. This is the fifth Holiday Inn hotel in the brand family in Japan, joining others in Sapporo, Sendai, Kanazawa and Miyazaki.

The 314-room Holiday Inn Osaka Namba is located in the heart of Osaka, just steps away from the city’s renowned Dotonbori Street where travellers can enjoy feasting at local restaurants and a range of entertainment activities, nightlife and shopping along the Dotonbori River. Osaka’s central shopping district, Shinsaibashi, is also just minutes away, where guests can shop at upscale brands and other Japanese boutiques. The nearby Kuromon Market is a favourite amongst the locals who refer to it as “Osaka’s Kitchen”, a lively market packed with approximately 150 shops of fresh produce, meats and seafood.

Holiday Inn Osaka Namba is a 40-minute train, car or bus ride from Kansai International Airport (KIX) and guests can easily travel to Osaka’s major attractions including the Osaka Castle, Universal Studios Japan, and the Tenhouzann Aquarium from the Namba train station nearby.

Hans Heijligers, Head of Japan, IHG said, “We are delighted to strengthen our brand portfolio in one of Japan’s major cities, Osaka and the opening of Holiday Inn Osaka Namba will bring more choice for our valued guests and nearly 99 million IHG Rewards Club members all over the world. With a tourism boom in Japan, and especially in Osaka, over the last few years, we have also seen a shift in the travelling patterns of international travellers who are now more interested in local experiences than just visiting world famous places or shopping. Travellers can find a variety of local experiences, such as sampling local delicacies and exploring the back streets that are unique to Japan, right here in Osaka.”

With the government’s focus on increasing annual international visitor arrival numbers to 40 million by the 2020 Tokyo Olympic and Paralympic Games, Japan’s capital city and outlying regions are set to benefit from the tourism boom.
First established in 2006, IHG ANA Hotels Group Japan, a joint venture between IHG and ANA Holdings, is the largest international hotel company in Japan operating a total of 33 hotels across IHG’s three international brands: InterContinental, Crowne Plaza and Holiday Inn – supported by the strength of the local ANA brand. There are currently three IHG branded hotels in Osaka – InterContinental Osaka, ANA Crowne Plaza Osaka and Holiday Inn Osaka Namba, catering to both domestic and international guests.

There are currently 1,199 Holiday Inn® hotels open across the globe, with a further 269 hotels due to open in the next three to five years*. Across the Asia, Middle East and Africa (AMEA) region, there are 90 Holiday Inn hotels open and 49 hotels in the pipeline. 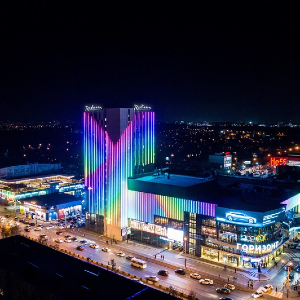