The turnaround in hotel investor sentiment

As our team of hotel lawyers returns from the Americas Lodging Investment Summit (or ALIS) in Los Angeles, we all noticed a big change. This is the first industry conference since the beginning of the recovery from the Great Recession where we have seen a clear turnaround in hotel investor sentiment that seems to be gaining traction. Unfortunately it is a negative turnaround.

Until now, the discussions have always been about how long the recovery will last (what inning are we in)? And how high values and fundamentals will go before they peak and start down in the next cycle. Not so much this time.

The irony is that hotel industry fundamentals remain sound and continue to improve, although perhaps a bit more slowly. But the downturn in the price of hotel REIT and C-corp stocks (many are about half of their value a year ago) now seems to be shaping an important part of the industry psyche and investment mindset. In this scenario, Wall Street is driving Main Street, instead of the other way around. In other words, the jaundiced perspective of Wall Street is having a real world effect on the hotel industry.

What is happening on Wall Street?

Here is how it works according to one industry analyst:

For these, or other reasons, the hotel industry has lost its “preferred darling” status with stock analysts and investors. They have decided that the hotel industry cannot sustain the high levels of growth it has produced in the past few years. They are downgrading the industry’s investment potential and re-directing their capital. As a result, stock values of hotel REITs and C corps are down and they are effectively prevented from raising new capital at attractive rates to buy more hotels. Side-lining these companies is starting to significantly affect the buyer-seller balance, and therefore the market prices of hotel properties.

How bad is it? Well the hotel REITs and C corp stocks are down as much as 40-50% (or more) from a year ago. In fact, you can buy hotels at a 30% discount from what it would otherwise cost you if you buy hotel REIT stocks.

What is the real world effect of Wall Street’s reassessment of hospitality?

At first blush, one might wonder how the stock market could possibly affect the real world of hotel investment and ownership. Who cares what the price of a stock is when your hotel is profitable, and things are looking to get better?

On closer examination, however, Wall Street is a vast and important source of capital for the hotel industry. It has provided billions of dollars of capital to public REITs and C corps who have been active buyers of hotel properties over the past few years. How often have you heard the complaint that someone couldn’t compete to buy a hotel because a hotel REIT had cheaper, immediately available capital and bid up the price?

Well, the REITs no longer have that kind of access to cheap capital when their stock is at half the price it was a year ago. This has effectively removed the REITs as active buyers for major properties.

In addition, Wall Street’s concern over the hotel sector has given real estate investors pause. Everyone is starting to rethink their investment in hotels. Are they paying too much? Is it too late in the cycle to be buying?

Everything should be fine but….

At a special session of the Lodging Industry Investment Council (the “think tank” of the hotel industry), David Loeb of RW Baird gave a great presentation on why Wall Street is making a mistake in downgrading hotel investment. RevPAR growth rates have been at record levels for too long and these levels are not sustainable over the long haul. Supply growth remains slower than demand growth. Demand growth continues. RevPAR growth continues with assistance from both the occupancy and the rate side. The hotel stocks and REITs significantly undervalue their assets. And so on. And so forth.

No one has been talking about these kinds of concerns until now. This changes the entire dynamic for the industry.

Implications for the industry

Perhaps these developments will prove to be a small blip on the screen and have little significance. But if they are an early indication of a trend, there could be many ramifications.

We will have to see whether a slowdown in REIT investment becomes a precursor of slowing investment by all other investors as well. Perhaps it will be a buying opportunity for other investors who have had difficulty competing with the REITs until now.

If the slowdown in buyer enthusiasm metastasizes, hotel values will peak and even falter. This will create opportunities, but also could precipitate significant declines leading to a broader selloff.

In the good times, the hotel industry tends to be liberal in spending to attract new customers, and maintain a high level of standards for the consumer. If the downturn is imminent, it will be important to control costs early while aggressively continuing to market properties.

The kind of hesitation we are seeing in the market raises the prospect for developers that if you have not already started the entitlement process on your project, it may be too late. We don’t know when, but the development window is likely to close sooner rather than later. You cannot assume that you have another three years. (Or you need to be prepared to open in a down market and weather the storm until recovery.)

Early indications suggest that lenders are wary of these developments and at hotel financing that is becoming more difficult to obtain. This raises the prospect of lesser amounts of financing and higher costs. You need to run your own sensitivity analysis on what that will mean to you.

We suggest that the sky is NOT falling, but that was just a drop of rain

We continue to believe that fundamentals for the hotel industry are solid and very positive.

It does seem ironic that unrealistic and “unfair” expectations of Wall Street should precipitate a downturn in the hotel industry, but that is a possibility.

In any event, hotel owners must consider whether this is the time to sell or if it is already too late. Sellers will need to be realistic in setting their valuation goals, and buyers are likely to be more conservative in their pricing analysis.

Many buyers are likely to delay or forgo hotel purchases. In any event, prices offered are likely to be more conservative. Perhaps this is a healthy rebalancing.

In all events, we hope that we do not “talk ourselves into” a downturn when none is justified by the reality.

Jim Butler is a founding partner of JMBM and Chairman of its Global Hospitality Group® and Chinese Investment Group™. He devotes 100% of his practice to hospitality, representing hotel owners, developers and lenders. Jim leads JMBM’s Global Hospitality Group® — a team of seasoned professionals with more than $71 billion of hotel transactions, involving more than 3,800 properties located around the globe. Jim is the also the author of www.HotelLawBlog.com. 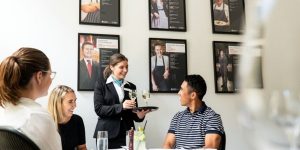 Ensuring your hotel’s visibility is consistent