In an exciting new venture, citizenM – the Dutch developer, owner and operator of citizenM hotels worldwide and Antirion, have partnered to establish citizenM Italian Properties, an alternative investment fund to invest in sites and existing assets to be converted into citizenM hotels located in Italy’s major cities, specifically Rome and Milan. 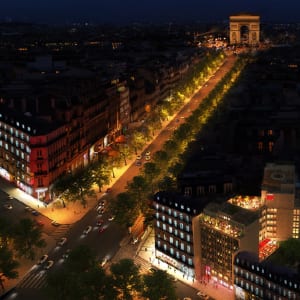 citizenM will bring their own unique affordable luxury style to the Italian market with hotels are created for a certain type of travellers – the mobile citizens of the world who appreciate contemporary design, user-friendly technology, genuine interactions and a frictionless experience. citizenM gives these travellers everything they need (like superfast free Wi-Fi and ultra-comfortable beds), and nothing they don’t (like trouser presses or chocolates on pillows).

citizenM’s unique design model means more rooms per square metre than any traditional hotel. This achieves unparalleled profitability per square metre and allows the company to develop hotels in prime locations, even in cities with the highest entry barriers.

The first acquisition of the Fund is for a property located in the historic centre of Rome, along the Lungotevere, facing Tiber Island and in the core centre of the Jewish Quarter. The property, designed and built in the late 1950s by the architect Eugenio Montuori, has an overall area of approximately 7.000 sq m, with six floors above ground and one below ground.

The asset will be refurbished and converted into a stylish hotel with 160 rooms, marking the first Italian opening for citizenM, soon to be followed by more locations in Rome and in Milan – Italy’s financial capital.

Klaas van Lookeren Campagne, citizenM’s CEO says: “Italy is a natural fit for the next phase of our global expansion. We are very excited to launch this joint venture with Antirion. It gives us immediate access into the competitive market with the power to source and develop several high- quality properties in Italy, together with Antirion’s experienced and like-minded team”.

Antirion’s establishment of the Fund leverages on their expertise, matured over the years through acquisition and management of eight hotel facilities located across Italy. “We are proud to support the introduction of citizenM in Italy. It sustains our ongoing commitment to international realties which rely on innovation as a business model. This investment is a signal of trust for Italy, for the capital and for the tourism industry, driving us towards an optimistic future. citizenM is a truly disruptive global hotel group that delivers exceptional experiences for guests while achieving materially higher returns on investment than any traditional hotel brand”, said Ofer Arbib, CEO of Antirion.

Colliers REMS has been appointed as property manager of the whole project.

The citizenM philosophy is ‘affordable luxury for the people, giving guests all the luxuries they would expect from a high-end hotel in a prime location, but without sky-high prices. citizenM was founded by Rattan Chadha, the founder and former CEO of the fashion brand Mexx. The first citizenM hotel opened at Amsterdam’s Schiphol Airport in 2008, followed by citizenM Amsterdam in 2009; citizenM Glasgow in 2010, and citizenM London Bankside in 2012. Rotterdam, New York and Paris locations followed in 2014. In 2016, two more hotels were added to the London portfolio: citizenM Tower of London, and citizenM Shoreditch. In 2017, citizenM opened Paris La Defense and Paris Gare de Lyon hotels. Also during 2017, the company moved into the Asian market, with its first location at Taipei North Gate. citizenM New York Bowery, the second New York hotel, opened in September 2018, followed by Copenhagen and Shanghai in December 2018. In 2019, hotels opened in Kuala Lumpur, at Boston’s North Station, in Amsterdam’s city centre and in the central business district of Zurich. Further announcements about expansion in the US, Europe and Asia will follow soon.

citizenM aims to keep growing as a vertically integrated developer-owner-operator-brand in gateway cities worldwide, and has funds available from its shareholders to do so. It’s unique value proposition, delivering a high profitability per square metre, allows the brand to develop hotels on prime locations in cities with the highest entry barriers. Suitable projects could be new- built developments, office conversions, components of mixed-use schemes or conversions of existing hotels and portfolios. citizenM can acquire development sites, existing buildings or turnkey delivered hotels and is open to joint ventures with local partners. The company will also selectively consider management agreements, preferably in combination with a co-investment. citizenM hotels is capitalized by three shareholders – KRC Capital, the investment vehicle of entrepreneur Rattan Chadha, APG, the largest Dutch pension investor and since last year, GIC, Singapore’s sovereign wealth fund. Costa resumes cruises from May 2021 The Brenton Hotel in Newport to open July 2020
Menu