The award-winning Dutch hotel and lifestyle brand citizenM has entered into an exciting collaboration with German project developer GBI. citizenM is looking for prime locations for their entry into the German hotel market. True to its philosophy ‘affordable luxury for the people’, citizenM is offering guests all the luxuries they would expect from a high-end hotel in a prime location, yet without sky-high prices. Since June, citizenM is also offering contactless stays powered by its new app. The focus for citizenM’s expansion in Germany will be on four cities: Munich, Hamburg, Frankfurt and Berlin, where citizenM plans to open several hotels in each city. GBI and citizenM will search for suitable properties and plots of land for the brand to acquire, and then develop turnkey citizenM hotels together.

With its owner-operator model – delivering a high profitability per square meter – lean operational cost structure, and a robust tech-forward approach, citizenM has been expanding its global portfolio smoothly and continuously across Europe, North America and Asia in prime locations. In March 2019, citizenM welcomed its third investor, GIC, Singapore’s sovereign wealth fund, raising the value of the company to €2 billion. GIC joins citizenM’s two other investors, KRC Capital (the private investment vehicle) and APG (the Dutch Pension Fund). Together, they have committed to invest €750 million of new equity for future hotel developments.

“It had been clear for some time that Germany, as Europe’s strongest economic country and a sought-after travel destination, would be one of our next targets,” says Klaas van Lookeren Campagne, CEO at citizenM, “but we needed the right partner and consultant for our expansion. We are delighted to have found this with GBI.”

In the spring of 2020, the GBI Group of Companies was named Germany’s largest project developer of hotels by bulwiengesa,a major independent real-estate consulting company in continental Europe. GBI’s hotel developments cover 140,000 square meters of usable space altogether. GBI has held its top bulwiengesa ranking for four years in a row.

“For GBI, the new mandate is a perfect addition to its development activities,” emphasises Reiner Nittka, CEO of GBI Holding AG. “In terms of brand positioning and location requirements, this is an ideal fit. Now we can supplement further locations with exactly the right brand.”  The building specifications and requirements for the high-quality furnishings have already been tailored to the German environment. Now a final check can be carried out directly in the name and on behalf of citizenM to determine whether hotels can be developed at the chosen locations in accordance with the standards of the brand.

Currently comprising 20 operational hotels in 8 countries, citizenM has a confirmed pipeline of 25 properties. With significant expansion plans in North America – as well as continued growth in Asia and Europe, where the brand is already firmly established in the minds of business travellers – citizenM looks forward to bringing affordable luxury to many more urban locations across the globe.

The citizenM philosophy is ‘affordable luxury for the people’, offering guests all the luxuries they would expect from a high-end hotel in a prime location, but without sky-high prices. citizenM was founded by Rattan Chadha, the founder and former CEO of the fashion brand Mexx. The first citizenM hotel opened at Amsterdam’s Schiphol Airport in 2008, followed by citizenM Amsterdam in 2009; citizenM Glasgow in 2010, and citizenM London Bankside in 2012. Rotterdam, New York and Paris locations followed in 2014. In 2016, two more hotels were added to the London portfolio: citizenM Tower of London, and citizenM Shoreditch. In 2017, citizenM opened Paris La Defense and Paris Gare de Lyon hotels. Also in 2017, the company moved into the Asian market, with its first location at Taipei North Gate. citizenM New York Bowery, the second New York hotel, opened in September 2018. Copenhagen and Shanghai followed in December 2018. In 2019, the portfolio grew by four new hotels – Kuala Lumpur Bukit Bintang (third in Asia, first in Malaysia), Amstel Amsterdam (fourth hotel in the Netherlands, third in Amsterdam), Boston North Station (third hotel in the USA), and Zurich (first citizenM hotel in Switzerland). In May 2020, citizenM opened its fourth hotel in the USA, first on the West Coast – Seattle South Lake Union. Two more openings are scheduled for autumn 2020 – Washington DC and Geneva. Further announcements about expansion in the US, Europe and Asia will follow soon.

citizenM intends to keep growing as a fully integrated owner-operator in selected gateway cities around the world. Its unique value proposition, delivering a high profitability per square meter, allows the brand to develop hotels on prime locations in cities with the highest barriers to entry. citizenM can acquire development sites and turnkey delivered hotels and is open to joint ventures on individual projects. citizenM considers new-built developments, office conversions, components of mixed-use schemes or conversions of existing hotels. The company will also selectively consider asset light transactions.

About the GBI Group of Companies

GBI AG and its sister company GBI Wohnungsbau GmbH develop hotel, apartment and residential projects. On its own or with partners, the company has been able to sell or place real estate in Germany and Austria with a volume of around €1.9 billion since its foundation in 2001. In addition, GBI AG acts as a fund or asset manager for funds of institutional investors in various property classes. This includes above all the selection of operators and locations as well as Due Diligence services with all purchase and sales processes.

The hotel project developments of GBI AG comprise approximately 14,600 rooms – making GBI the largest hotel developer in Germany. The company is active for all relevant national and international brands from budget to upscale segments. The long-stay segment has grown particularly strongly. Under the brand umbrella SMARTments®, the commitment to developing and operating micro-apartments for students, business travellers and private individuals has been stepped up since 2010. In the commercial sector of SMARTments® business, the project list includes 1,169 apartments.

The parent company of GBI AG is GBI Holding AG, a 100% subsidiary of the Moses Mendelssohn Foundation. 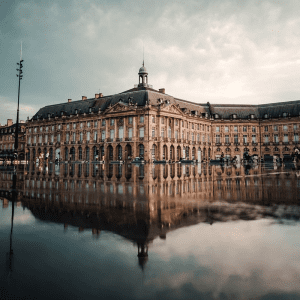 Carving out plans for a greener future