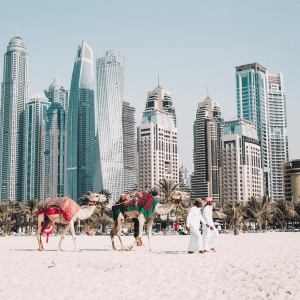 According to Lodging Econometrics’ (LE) Construction Pipeline Trend Report for the Middle East, at the end of 2022’s first quarter, the region’s hotel construction pipeline stands at 536 projects/138,915 rooms, unchanged by project counts and down 9% by rooms year-over-year (YOY).

Limited travel and tourism throughout the Middle East have caused the region’s hotel development pipeline to stall over the past couple of years. However, consumer confidence and the pent-up demand for travel have improved greatly since the beginning of the year, and this, in turn, has many key travel hubs and tourist destinations seeing a recent boom in bookings. The Middle East region is home to some of the world’s top luxury travel destinations and is known for its larger, luxury accommodations, and its hotel construction pipeline continues to reflect that as an astounding 72% of the projects in the Middle East are in the top three high-end chain scales of luxury, upper upscale, and upscale. Also, 128 of the 536 hotel projects in the Middle East’s construction pipeline, at the end of Q1 ‘22, have 300 or more rooms. For example, Makkah in Saudi Arabia has nine projects with over 1,000 rooms each. These nine projects account for 13,222 or 56% of the rooms in Makkah’s pipeline.

Countries with the greatest number of projects in the construction pipeline at the end of Q1 are Saudi Arabia, with 208 projects/59,290 rooms, and the United Arab Emirates (UAE), with 121 projects/2,999 rooms. Following is Egypt with record-high totals by projects and rooms of 69 projects/16,412 rooms, then Qatar with 61 projects/14,835 rooms, and Oman with 30 projects/6,195 rooms. Dubai continues to lead the construction pipeline in the United Arab Emirates with 84 projects/24,306 rooms.

According to LE analysts, at Q1 ‘22, the cities in the Middle East with the largest hotel construction pipelines are the Provincial region with 71 projects/14,848 rooms; Riyadh with 60 projects/12,080 rooms; Doha, Qatar with 51 projects/12,395 rooms; Jeddah with 42 projects/8,758 rooms; and Makkah with 35 projects/23,604 rooms. In the Middle East, 48% of the projects and 52% of the rooms in the construction pipeline are found within these five cities.

Forty-eight percent of the projects in the pipeline in the Middle East belong to three leading franchise companies at the end of the first quarter. Hilton Worldwide with 96 projects/25,216 rooms, followed by Accor with 87 projects/23,583 rooms, and Marriott International with 76 projects/22,098 rooms.